Reasonable doubts and the OJ verdict 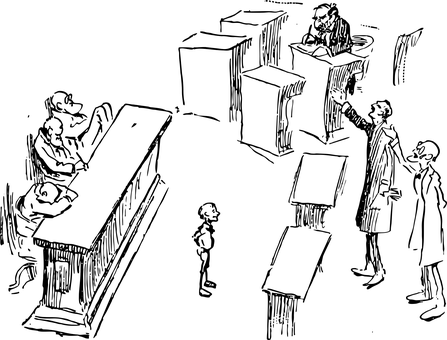 To further analyze this concept of reasonable doubt, it helps to apply it to a real-world case: The OJ Simpson trial (see Toobin 2015 for a detailed account of the events).

While there may be a consensus among legal experts regarding the first two questions, some prominent legal experts disagree about the third. Did the jury reach the proper verdict?*

Harvard Law Professor Alan Dershowitz, who was part of Simpson’s defense team, argues that given the evidence presented, the jury was reasonable to believe that the LAPD lied and fabricated some of the evidence (Dershowitz, 1996). These beliefs were reasonable because the defense team presented the jury with information about a chemical compound EDTA that was found in the blood sample taken from OJ’s sock. The defense team argued that the presence of EDTA indicated that the blood did not come directly from Simpson, but came from a preserved sample of his blood taken by the LAPD detectives. One of the theories presented to the jury was that one of the officers spilled the blood obtained from Simpson on the sock so that they would have conclusive evidence of his guilt. Dershowitz then argues that if the LAPD fabricated some evidence, it is reasonable to conclude that the prosecution did not prove beyond a reasonable doubt that OJ was guilty. To support this conclusion, Dershowtiz cites a closing argument by one of his expert witnesses, Dr. Henry Lee: "If you find a cockroach in a bowl of spaghetti, you don't look for another cockroach before you throw out the whole bowl of spaghetti."

Former prosecutor Vincent Bugliosi disagrees with Dershowitz’s analysis of the verdict. Bugliosi argues that, even if it was reasonable to believe that some of the evidence was fabricated, it was still unreasonable to doubt Simpson committed the murders, given that there was still ample evidence of his guilt. These opposing viewpoints held by two prominent legal experts raises an interesting question about the reasonable doubt standard: how much evidence is needed to undermine the belief that a suspect is guilty? Who is right on this point? Dershowtiz or Bugliosi?

Casting aside any doubts about the conspiracy claims of Simpson’s defense team, assume for the sake of argument that the LAPD did plant the bloody sock. Would it be reasonable to conclude that OJ might be innocent? Bugliosi firmly argues, “No” (Bugliosi, 1996). He points out that there was still enough evidence (both physical and circumstantial) to convict Simpson that couldn’t have been fake or tampered with. Bugliosi cites the conclusive evidence of Simpson’s blood at the murder scene, the bloody size-12 bootprints discovered with a trail of OJ’s blood to the left (bandaged left hand the morning after), no alibi for OJ during the 45 minute window when the murders took place, the brutal nature of the killings (unlikely that drug dealers or strangers would do this), ample evidence that OJ owned and wore the murder gloves, and his prior history of spousal abuse. Furthermore, Bugliosi points out that not a shred of evidence points in the direction of another suspect.**

Dershowitz, of course, is aware of the evidence that Bugliosi cites. Despite the fact that they are both extremely knowledgeable and skilled lawyers, they still disagree about whether the verdict was reasonable. If the experts disagree, how can we establish whether a given verdict is proper or not? One way to settle the dispute is to carefully examine an epistemic principle that is at the heart of their disagreement. Here is what I take the underlying principle to be:

The No Defeater (ND) principle: In order to establish guilt beyond reasonable doubt, there may be no defeaters to the evidence that establishes guilt.

I think it’s fair to say that Dershowitz endorses this principle, whereas Bugliosi clearly rejects it. How plausible is it as a general principle for establishing reasonable doubt? To test its plausibility, let’s rewind the tape and suppose that the prosecution came across some additional evidence. A video is presented to the jury that features OJ walking up North Rockingham Avenue, entering his Bronco with a visibly bloody left hand. Would it be possible to reasonably doubt Simpson’s guilt at this point? According to the ND principle, it would be, provided that the jury were aware of some defeaters (e.g. a planted bloody sock). But I don’t buy this for a second. For defeaters to undermine OJ’s guilt, in this hypothetical case, they would need to undermine or cast doubt upon the preponderance of evidence, not just some of the evidence. One piece of damning evidence is enough to discount any of the defeaters presented by the defense team. Of course, we could run the tape back and imagine a scenario where the video evidence, as well as the rest of the evidence, would have been defeated. Suppose that the defense team uncovered that the LAPD hired an OJ look-alike to appear on camera that night to frame OJ. That would clearly undermine the prosecution’s evidence. But absent such evidence, the video evidence alone would be enough to establish guilt, even if there were some credible evidence that the LAPD planted a sock or a glove.

*The question is a normative rather than a descriptive one. Whether or not OJ did it is a factual question. I take it that whether the verdict was proper depends on the justification of the jurors’ beliefs (not the facts).

**In Bugliosi’s book “Outrage”, he documents additional evidence of guilt that was not discussed or presented to the jury. In brief: OJ’s behavior after the murder (suicide note, fled from cops with disguise and 9k of cash), circumstantial evidence of premeditation (purchase of disguise 2 weeks before the murder), incriminating testimony from OJ that he had cut his hand that night and the he left blood in several locations (but no explanation for how this happened).

Posted by David Sorensen at 5:15 PM No comments: